While Heads Up’s adult audiences were being asked to consider the implications of surveillance, cyber security, freedom of movement, whether honesty is the best policy, the right to associate with whoever you choose, spying on each other and making arguments for and against placing people on terrorist watchlists at Theatre Conspiracy’s mind-blowingly thought-provoking Foreign Radical, the next generation were charged with making a better life for us all by laying down the template for a new planet at non zero one’s “unique interactive performance” for 7-12 year olds.

Accommodating up to 40 young people, these brave young and intelligent souls took their designated place on a square grid to interact with Futuretron, which would crunch the data required to establish our new home.

Hull school students had maxed out several performances from Thursday at Heads Up in Hull Central Library and had already made some brave and bold decisions to create alternatives to the world that their adults have played a part in creating. On the final day of the festival, socially conscious adults smart enough to let their children enter the auditorium without them, had booked tickets for a magnificent crop of youngsters at this public showing.

With the stock from the Children’s Library relocated, making way for the required grid square and giant screen that visually represents the live, highly intelligent computer interface, young audiences members immediately felt at home as they were seated, in a manner not too dissimilar to their normal arrangement in front of games consoles and screens, and most, if not all, were obviously hoping that a giant multi-user game of Fortnight or Minecraft was about to ensue. 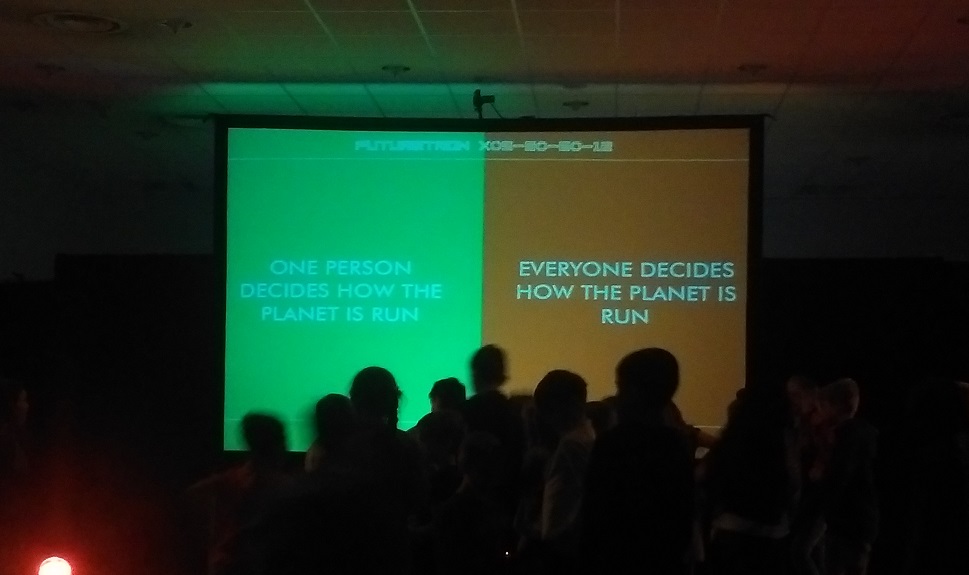 But no, they were instructed that they had a clear mission today. In 1974, a manned mission was sent into space to look for inhabitable planets. Now, in present day, the sensors aboard Shuttle X27-40 indicate that it may have found just such a planet. The three astronauts on board are about to be woken from their hypersleep … and needed help. The children seated in front of Futuretron had a mere 45 minutes to decide on an identity for the planet, its laws and values.

They quickly got down to work, stepping up to the microphone to share their thoughts with Futuretron. This planet would be named Waleplas (the combination of the first syllable of one child’s surname, another’s residential street and another’s favourite food – lasagne).

A production packed with humour that 7-12 year olds could easily relate to and laughed heartily at, as well as plenty of serious thoughtful moments, it’s clear that hope of a better world is not lost on youngsters. They opted to let everyone make the rules for this new abode, rather than have one supreme leader, and thus democracy – and hopefully one that works better than current systems on Earth – and respect for fellow humans, remains intact.

Observing this process unfold, it’s unnerving that what may set us back in our current living arrangements quickly rises to the fore. Those who should loudest are the voices that dominate. Things get rowdy – as you’d expect with up to 40 7-12 year olds – but voices do get drowned out, cliques form, some children take themselves out of their teams and also become observers of the madness and rising noise levels, while others remain thoughtful and attempt to silence the louder members of the group. While the running time avoids everything descending into Lord of the Flies madness, had the decision-making process unfurled over days, rather than the allocated running time, no doubt Heads Up, non zero one and the magnificent Absolutely Cultured City of Culture volunteers present would have had William Golding-style levels of crowd control to manage.

As it was, once they got down to business and channels of communication became clearer, the bright sparks collectively found a way to make some smart decisions. McDonalds restaurants and the monarchy would be left behind on Earth. Puppies and games consoles would be permitted. There would always be more trees than houses, as the ecology, oxygen and a pleasant environment were deemed a high priority. They would build a library; books, learning and knowledge is essential. Obviously current pre-occupations were also factored in; a games arcade was chosen over a place of worship, thus ensuring that Fortnight and Minecraft would continue to be played on Waleplas.

Thus, the future in the hands of this generation could well be a rosy one. Post-show, reunited with parents, each child was eager to share what was possible, and how smart they had been contributing to these laws and values. Parents were proud, and children were delighted to have been able to make decisions.

Ground Control is a smart, intelligent piece of work and an interesting opportunity and forum for young people to air and form their views on life, the universe and everything. Discussions will no doubt ensue in the homes of these 7-12 year olds for days, weeks and months. Even those that don’t embrace the participatory element learn something about themselves and other children.

While one young audience member suggested that the whole experience may have been just a little bit intimidating for those who are shy – “it was just too social for me” – for most it was the start of a journey of making important decisions and being conscious of the impact these decisions may have on others, and potentially becoming politicised and active along the way.