Michelle Dee has been a part of Heads Up Festival every step of the way. Since day one, Michelle has joined us as both an audience member and a critical voice, providing a host of blog posts and reviews along the way, and keeping the festival organisers’ egos in check. It’s impossible to imagine Heads Up without her presence and, for those involved in Heads Up, it’s also been a joy to witness Michelle’s rise to prominence as an artist. Here, Michelle talks more about her feelings towards the festival. 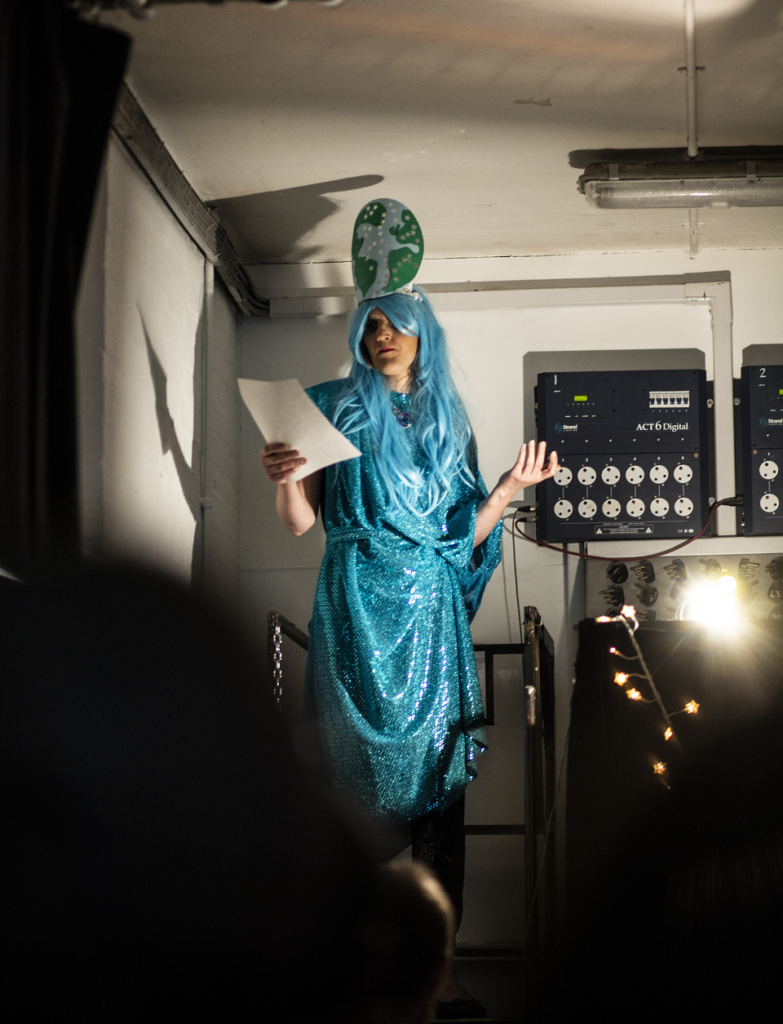 It’s a while ago now – over five years – but do you remember how you got involved with Heads Up?

It was during the resurgence of new theatre, other spaces led by platforms such as Scratch@Fruit and the explorations of where theatre can happen. I’d observed that change as new spaces opened up: the early promise of Humber Street.

Theatre began popping up in warehouses, in basements, up and down the street, in office spaces on busses and trains. There was a real feeling that the time was right to rethink how we make, present and experience theatre. Heads Up Festival was borne out of all that creative energy opening up new
spaces and audiences to performance.

What has been your highlight over the ten previous festivals?

So many highlights and standout performances. If memory serves the first Heads Up had Paper Cinema’s Odyssey inside the big top tent on the Freedom site: that was a puppet show on a epic scale the following year Heads Up presented genderqueer dance/theatre fusion Ballad of the Burning Star: a drag queen in war torn Israel … can there be a more challenging or better premise for a show?

Do you have any abiding memories of the artists and crew that have worked on the shows?

Still the most surreal memory is the sight of Will Dickie in full protective gear in Team of the Decades, slowly gyrating on the traffic island in the middle of Hedon Road. Cars slowing down to stare as we the audience on the grass verge looked on, in on the secret, perfectly in tune with the performance, having lived every twist, turn high and low of the hero’s story. And I don’t think I will ever forget Reassembled: Slightly Askew – sombrely signing a medical release form, laying down on a hospital bed and waiting for the sound of the utterly beguiling work that took you on an alarming binaural journey inside the mind of a head trauma patient.

When you see a production and you know you’ve got to write a post for the website to a pretty tight deadline, what goes through your mind and what’s your process?

I used to panic it’s true: how am I going to write something, what if I don’t get it or get the wrong idea? It’s no easy feat to combat the feelings of dread I have developed a certain laissez faire approach, I put faith in my own ability and believe that something will come, and when it does to seize upon it. I care
about what I write redrafting until I’m happy, the festival audience demand a quick turn around but I don’t let that deter from the end result: entertaining and hopefully insightful responses.

I love going into a show not knowing what I will see or what I will write and twelve hours later having found my hook, my angle and before me sits a new piece of writing. I’ve worked closely with festival photographers Jerome Whittingham and Anete Sooda and seeing my text beside their wonderfully narrative photographs is always a joy.

If you had to persuade someone to come along to Heads Up, what would you say to them?

It’s a laid-back festival with a reputation for bringing the more unusual and out-there performances to the city, new work that challenges traditional theatre: every season there is at least one thing on the programme that leaves you reeling, questioning what you’ve just seen and done.

It is almost like being part of a select club, open to all, with none of the usual entry requirements other than an unbridled passion for theatre and performance.

You’re a creative in your own right – if you could create a piece of work for the festival what would it be?

I would love to do something with dance, I have been a fan ever since seeing my first contemporary dance show on my graduation night and recently have begun to participate in community danceworks.

Elevator pitch: A promenade dance piece set in different locations, dancers on rooftops in mirrors, on water, in the sky with lights, cameras, interaction and lots of drama. I love the elements of mystery and surprise: that feeling of being transported to another world where different rules apply or no rules…
places where anything can and does happen.

I also like the idea of doing a show outside of the town, perhaps taking something and building a site-specific work that exists only as long as we are present.

If you could improve the festival, what would you suggest?

More scotch eggs and pickle for post-show gatherings, cushions for feature-length Heads Up Introducing screenings and for it to become the platform for the next generation of performers to embrace.