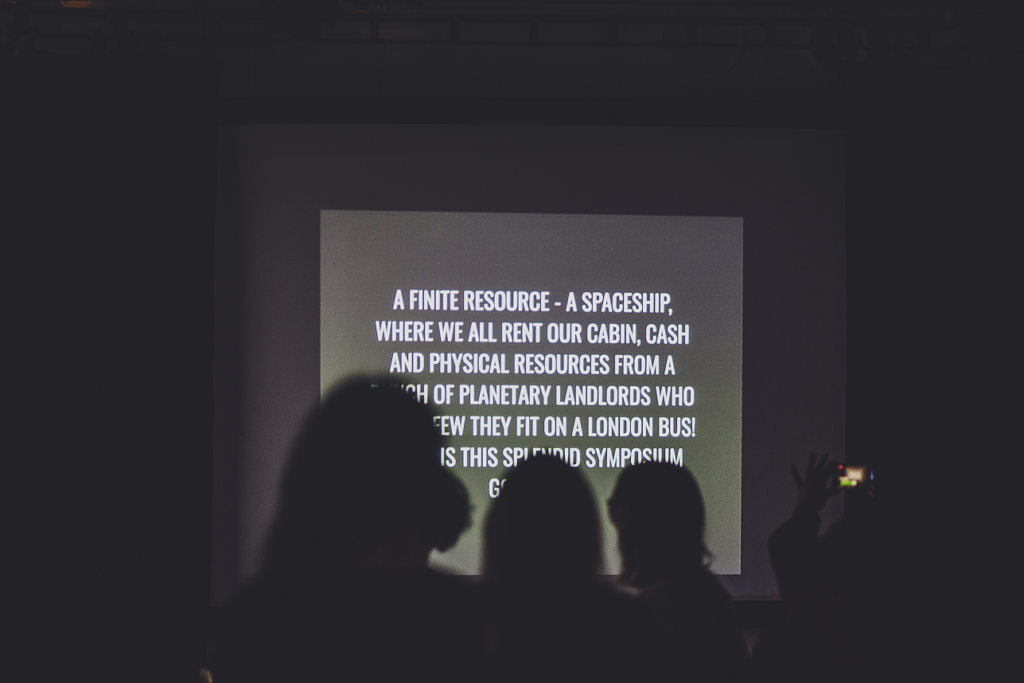 What is Earth? For the fluid group of artists that make up What Is? Collective it is telling tales to a willing crowd and vegetables; it is listening to troughs of topsoil and worms. Worms underground, worms on walls, and hedgehogs on walls hibernating. It is sparkly blue, poetry performance and circular paintings – like cutaways of exotic silvery planets on large canvases. More paintings, with surrealist illustrations, paintings with feathers, even a bird’s nest. 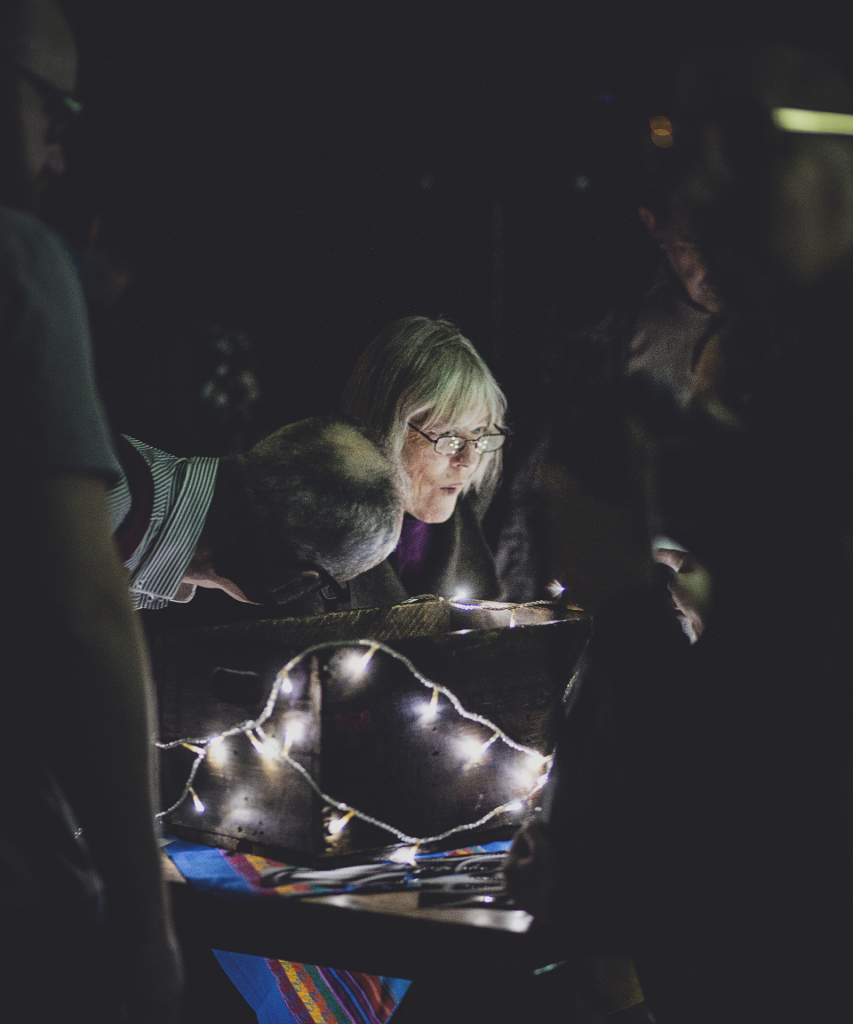 Maps are part of the earth. Where would you be without a map? Maps are all about power and naming things. Tipping the old Greenpeace cap you will often hear tell of the Carbon Footprint: there’s one of those too, standing tall – tall as a foot – near the giant worms on the wall, looking all charred and monolithic.

More dead things are bees and then there’s the strange phenomenon known as the overview effect.
Overview Effect: first described by author Frank White in 1987, is an experience that transforms astronauts’ perspective of Earth and mankind’s place upon it. Common features of the experience are a feeling of awe for the planet, a profound understanding of the interconnection of all life, and a renewed sense of responsibility for taking care of the environment.

The What is Earth? experience begins in a lift where a countdown has just begun. It is followed swiftly by excerpts from actual astronauts – voiced by Michelle Dee – describing the first moment they [the astronauts] saw our home planet from space. 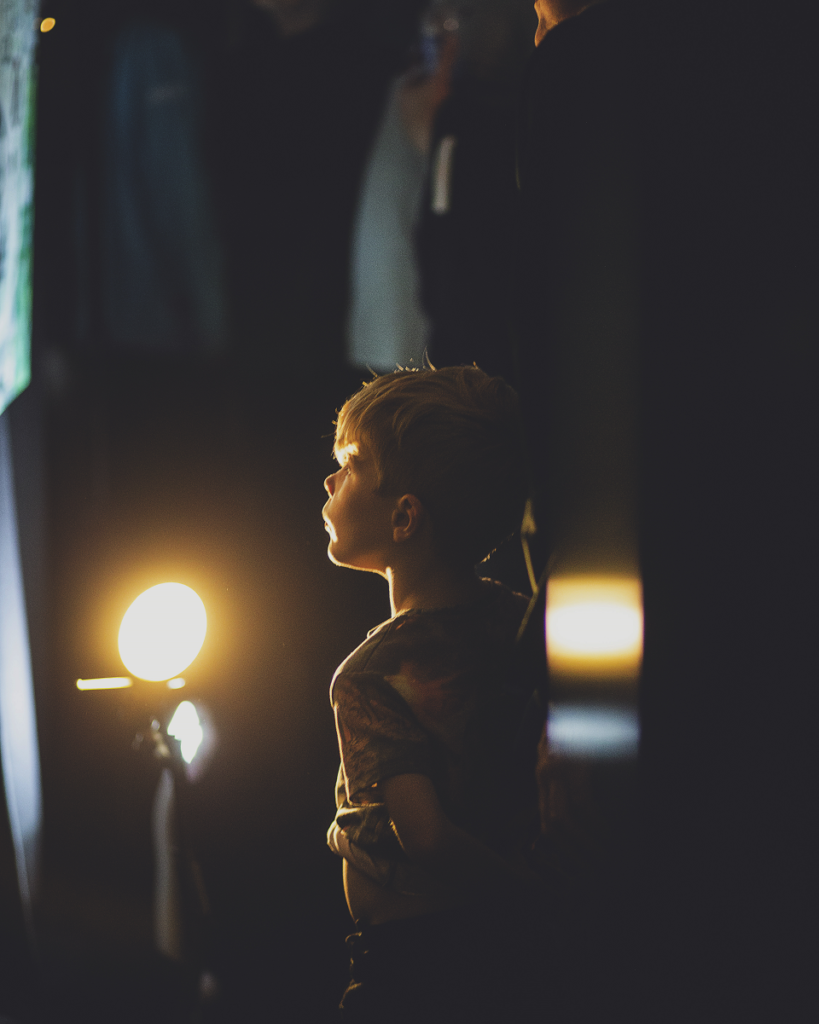 Heads Up Festival goers are a plucky bunch, they know the joy of taking a punt and coming away with a winner. In this case a man – Dave Windass – narrating a vegetable-based histoire d’amour (love story) and a free head of cabbage or for one lucky punter a Romanesco Broccoli (a green vegetable that looks like the eyes of a chameleon or… one of those fractal pictures popular in the early days of rave).

Guided by some helpful volunteers the intrepid explorers, now utterly bemused, were ushered into a darkened room. Where the aforementioned worms were and encouraged to put their ear to the soil to eavesdrop their chatter.

Photographer Jerome Whittingham asked himself if you want to know what is earth, who better to ask than an earthworm? So he found his answer by getting up close and personal to present some rather arty shots of the little wrigglers. Collective noun for worms: a bed, a bunch, a flat or a clew.

So now you can decide which of these to use when showing your friends your very own take-home worm portrait. Also being picked up and taken home were free copies of the What is Earth? zine and the veggie love story.

Children correctly identified the sleeping hedgehog, adults did not. Then poet Michelle Dee stood on some steps, costumed by Bluebeany, a globe perched atop her head and told everyone off for destroying the planet. The performance piece, delivered in dramatic fashion, shifted on its axis with imagery inspired by Milton, Kubrick and some of her own explorations of the overview effect. (Many thanks to Dame Jocelyn Bell Burnell and Lemn Sissay who both generously, during the Q & A of Poetry and Science: the space in between for British Science Festival 2018, gave Michelle some pointers in how to think about the piece)

Please join us next time when we ask another searching question… and then think up some weird and wonderful ways to interpret it.

One thought to “REVIEW: What is … Earth? Turns out it is a whole bunch of things but not flat!”