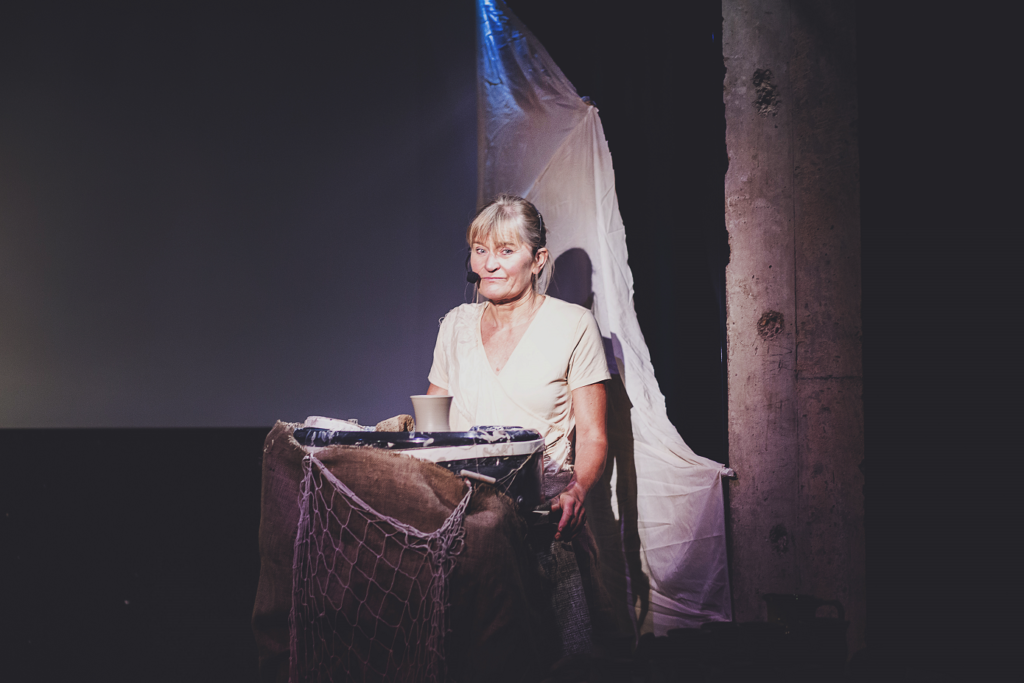 At the beginning of the festival we sent writer and Heads Up’s official blogger Michelle Dee to relive Ensemble 52’s Pale Blue Dot – scratched previously at Heads Up – and performed in 2018 at Blue Dot, the science music, art and culture festival at Jodrell Bank, where it was seen by various audiences including one Richard Dawkins.

Thought provoking… it is the worst response to receive for a piece of theatre or performance. It is lazy and tells you nothing. People reach for it when they want to sound superior and knowing: it does the opposite.

Heads Up Festival organisers suggested that the Autumn Season was ‘theatre and performance to make you think’ and charged with gathering audience responses after the third night of Pale Blue Dot, I was able to bypass the lazy responses and drill down to something meaningful.

made you think about your impact on the world

It is good for us to be reminded about potential futures

That last one is particularly prescient seeing that the presentation of Pale Blue Dot includes projected illustrations by artist Gareth Sleightholme which deliberately plays with cartoon and graphic novel tropes.

The sit down book approach to the storytelling, appears to have worked upon the older audience members while some of the younger ones felt it wasn’t theatre enough. I suspect the former relished the rare opportunity to just sit back and listen to a story, to immerse themselves in the fantastical imagery and sublime ambient score from The Broken Orchestra.

At its heart Pale Blue Dot is a survival tale with a hefty dose of magic realism. We follow the fortunes of central female character Aiko, set adrift upon the waters of a flooded earth. The story really catches fire with the arrival of Toru, a caracal with a supercilious air and drawl to match.

Instead of being driven by dramatic action sequences, as post-apocalyptic stories often are, Pale Blue Dot is driven by questions. Aiko questions her place in the world, whether she is the last living soul upon it? What is her purpose? Why was she spared and was she actually any better off than those who perished? During her quest she begins to have delusions of grandeur, musing upon the idea of having become a God herself. I suspect the gradual shift to autotheism has more to do with that which she is scavenging nightly to keep herself alive – rather than divine intervention.

The unusual work written by Dave Windass and directed by Andrew Pearson maintains a gentleness and almost zen-like quality aided by the imaginative staging and quietly questioning voice of Sarah Brignall as Aiko.

The writing pitches global concerns, humanity’s greed; a never-ending thirst for power and economic control, ecological issues, over consumption, pollution, the depletion of natural resources against threads of Greek mythology. Endymion, son of Zeus, begins to occupy Aiko’s mind – whether she is to become Selene the Titan goddess of the moon, is not clear. And then there is the sudden and welcome manifestation of a magical being. The voice of Toru the caracal, who can perhaps be viewed as playing a similar role to that of Aslan the lion in C.S. Lewis’s Narnia chronicles, is achieved via voice manipulation, whether this method was successful or not is open to debate.

Pale Blue Dot may not be to all tastes. Some may find the stillness of the narrator approach unfulfilling, some may not wish to dwell on the bleakness of this possible future. Whereas others, and there were many, will appreciate the static presentation, set against a backdrop of exquisite illustrations and there is always Toru the talking cat, to lift the spirits.