“It’s not often you get to introduce someone who has made you laugh, cry and sweat and still be able to look them in the eye,” says Dave Windass welcoming Hull’s First lady of Soul to the Kardomah94 stage.

Tonight’s Heads Up Introducing event was an opportunity to share a musical journey and perhaps learn a bit more about the ever-popular Lyn Acton.

We’ve all done it: imagined ourselves on Desert Island Discs, choosing our favourite songs. The younger generation do it all the time creating Favourites playlists, or filling Facebook with music – instead of cat pictures –  sharing their Top 10s. 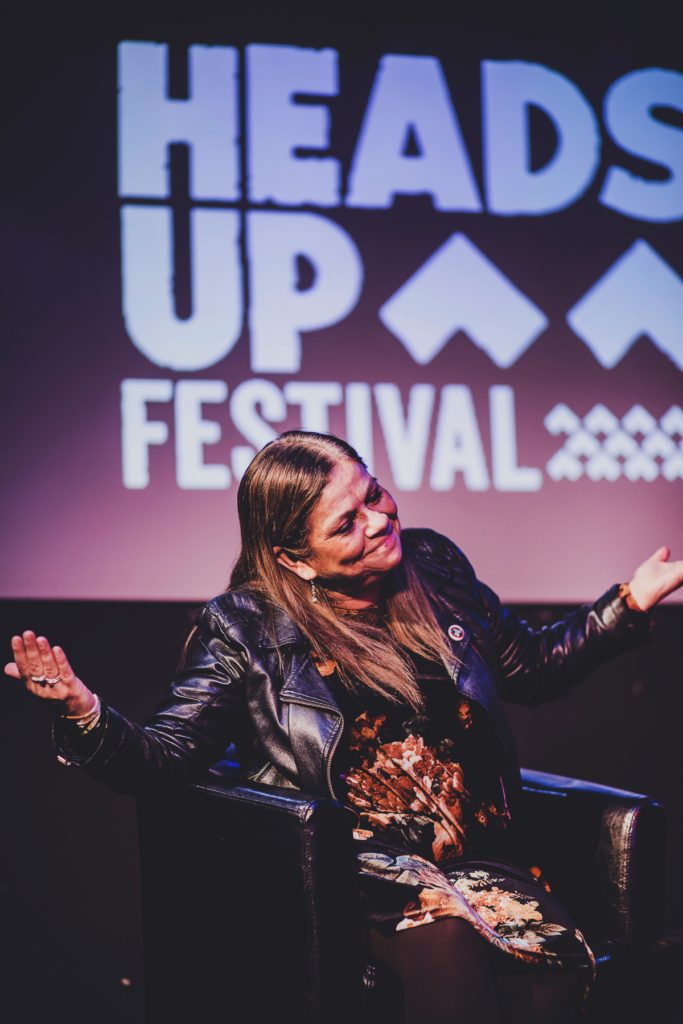 Part of the ‘HU5 Massive’ Lyn was born on Hessle Road above a sweet shop, then moved aged four, to North Hull Estate where she attended Hall Road Juniors. “An interesting experience: challenging at times being the only non-white family,” she tells the festival audience.

At family parties her father would set her on a table and she would sing ‘Carolina Moon’ to delight the guests. Lyn started getting really interested in music around age 13, going to watch lots of bands play live and then later singing in bands herself.

“I’ve been in bands forever, always in a band. I get lost in the music… I always say my happy place is on a stage.”

The first track Lyn has chosen tonight is Aretha Franklin – one of her many “best ever singers”  and ‘I Say A Little Prayer’. “I like songs that tell a story,” she explains as the audience listen and appreciate one of the giants of soul music.

During those early days Lyn was trying to find her voice, she knew she loved singing and sung all the time: incredibly her school said she couldn’t sing and didn’t let her join the choir. She listened to different radio stations, all kinds of genres and immersed herself in music her friends were listening to. “By singing along to Deniece Williams I found my voice,” Lyn says introducing ‘Free’ from the album This is Niecy.

Over the course of the next hour or so we learn about Lyn’s love of harmonies and the Eagles, as she recalls her time in the band Coyote Trap with Katie Noon. There’s some ‘Good Times’ had with Nile Rodgers and Chic “When I heard this I thought I’d gone to heaven,” followed by Marvin Gaye and the sublime ‘What’s Going On’. At this point in the evening the audience are invited to close their eyes and really listen to the lyrics. It is a strange thing to sit in silence with a large group of people with your eyes closed, listening to a song in its entirety.

“This one has horns,” Lyn says introducing ‘Into the Mystic’ by Van Morrison. “I love brass – when we started Pearl’s Cab Ride in ’91 there were no other bands with brass in.”

Touching upon her own performance style Lyn explains that for her, it is really important to involve the audience. “I want people to have a good time, because I’m having a good time.”

Dave talks about all the good times he’s had partying at the end of a long week, with the 9-piece funk and soul band Pearl’s Cab Ride, which Lyn has perhaps become best known for. When she’s not working Lyn likes to knit and crochet, “It’s therapeutic and gets me through the long nights,” she says hinting at the tragedy of losing her son.

“Chaka Khan is a really good jazz drummer,” Lyn reveals, as we are presented with an image of Dave W singing along to ‘I’m Every Woman’ in his living room. Talking about women in music then and now, Lyn states that things were very different when she started out, “Women in bands were just there to sing and look pretty. Today it is far better with all the female singer songwriters, like Emma Fee and lots of others: women in music are holding their own.”

To close a different sort of Heads Up Introducing Lyn chooses Ella Fitzgerald and ‘Every Time We Say Goodbye.’ The words in the song are very close to her and there are tears in the audience as she describes the second her life changed forever, with a knock on the door. There are more tears to come with Lyn’s final and heart-breaking choice of Nat King Cole’s  ‘Smile’. And we sit and remember Jack Cosmo who left us so suddenly and cruelly seven years ago.

I’m sure Lyn wouldn’t want me to leave you on such a sad note. The sound she’d like us all to go and find is Joyce and ‘Aldeia de Ogum’  Let the sweet Latin rhythms and scat singing transport your soul, to a sun-kissed Brazilian village.

‘Why I’ series by Sodium Film incl Lyn Acton’s Why I Sing http://sodiumfilms.com/whyi/