Ugly Chief : It’s what he would have wanted

If you were to go looking for the perfect father/daughter relationship – you know the sort of thing, the doting Dad who’d do anything for his little girl and loving daughter eyes wide with adoration – you wouldn’t immediately look to Victoria and Mike Melody and say, ’Found it.’ 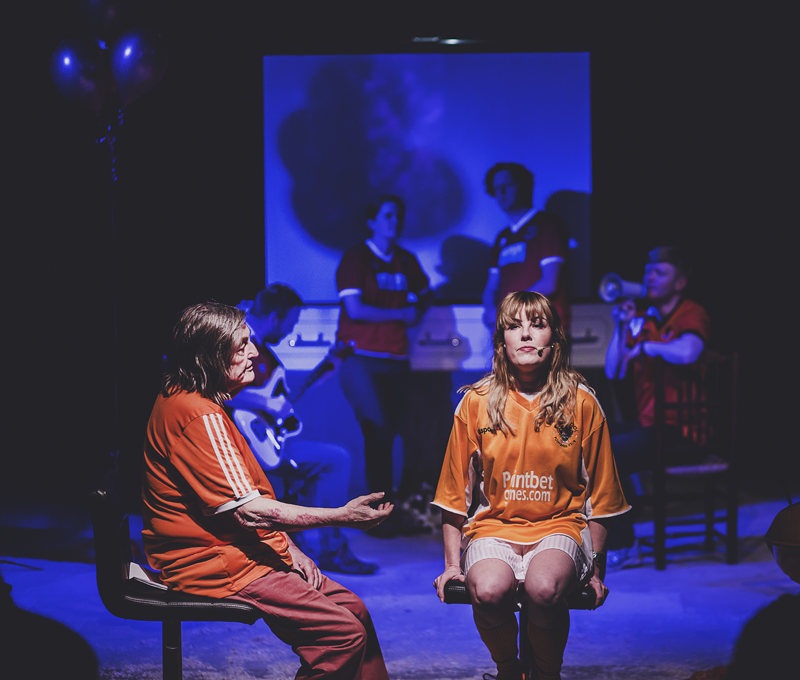 In 2013 Victoria’s father and TV antique dealer Mike Melody was diagnosed with Motor Neurone Disease and given just five years to live. Victoria was put in charge of planning the funeral, but a year later the doctors realised they had misdiagnosed Mike.

Rather than promptly banishing all thoughts of death like any normal family would, father and daughter decide to go ahead with the funeral and Vic promptly takes herself off for a job at a funeral parlour.  (During research for previous shows Victoria has become a pigeon racer, a Northern Soul Dancer, a championship dog handler and a beauty queen.)

Ugly Chief ‘A Eulogy to a Living Soul’  by the award-winning Victoria Melody is a moving real-life story that lifts the lid on the strange practices and rituals surrounding death in this country, in a very unique way.

There’s a live band on stage playing fitting music providing ‘the emotional depth’ – the vocals led by Kieran Rafferty, are particularly atmospheric floating over the church stone – lots of laughter, a few tears and not forgetting the all-important narrative arc.

What on the surface might appear to be a whimsical notion, develops into something far more profound, with both parties renegotiating their relationship and responsibilities, towards each other.

‘It’s what he would have wanted.’

Standing on high, addressing the audience from the pulpit of Hull Minster  – I can think of no better place to have staged this particular show – Victoria reads the eulogy she has written for her dad. The passage highlights the best bits of his life and glosses over any unpleasantnesses. Mike, sat centre stage, in a high back dark wood chair, is having none of it. He believes that if the pair of them are going to go ahead with this ‘living funeral’ then it has to be done truthfully, ‘Warts and all.’

He proceeds to unpick and dissect the eulogy, suggesting he’s written one of his own, then goes on to describe his idea of his funeral: a New Orleans jazz procession and all the congregation dressed in tangerine, the team colours of his beloved Blackpool FC.

As everyone who has ever been to a funeral knows, they are never about the dearly departed. They are for the benefit of those left behind, to assuage their own anxieties and guilt. As the show continues Mike points out that, more and more, funerals are about following a certain blueprint: flowers, hearse, coffins and all the rest, and all coming with a hefty price tag. The more money that you spend equating to how much you loved them. ‘Baloney!’ 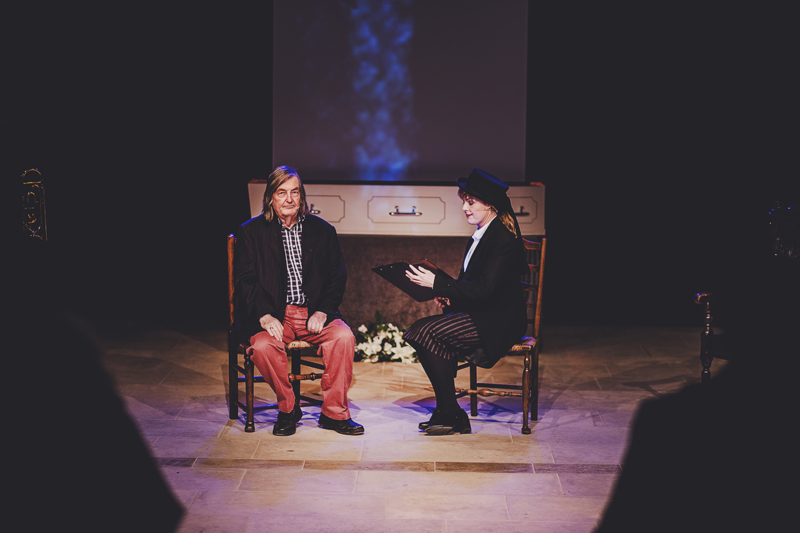 Mike’s obvious frailty bringing about Victoria’s caring side, comes into direct conflict with his seemingly selfish desire to suddenly confront his demons. The tension threatens to spill off the stage, the audience shift uncomfortably, the band are staging a walkout.

Victoria proceeds to paint the real picture of Mike Melody and he appears to revel in the ‘pathos’ as painful truths are driven home. The question lingers over just who exactly, is this funeral for and whether any meaningful resolution can take place between the two.

Halfway through the show Mike gets to do a bit of antiquing, as a limited edition pot and a pair of solid silver Love Spoons brought forth from the audience, are given the dealer treatment.